This run was one of the trickiest for me to accomplish, on account of being out of town for the weekend.  Good luck, timing, and friends lending me their scanners allowed me to catch all but 1st set Friday night, and post all the pictograms (as people have been referring to them) in a timely manner, generally right after each set.

The response that I have gotten from these has been amazing!  The forums have taken a liking to them, and Phish.net is even using them on the show recaps! They have been really helpful in getting these out there as well as YEMblog, Phishlove, PhanArt and others on twitter.  I’m just glad that people get a kick out silly little sketches I draw about a band I like.  I’m especially grateful to Phish.net, whose setlists and notes I refer to.  They were gracious enough to give me permission to use them, and have been encouraging me to continue doing them.  As you may or may not know, Phish.net runs the Mockingbird Foundation, a nonprofit, so pretty much anything .net makes from their copyrighted material benefits  Mockingbird, who uses that to provide music education for children.  As an educator, I know the importance of the arts in education, which for many schools is no longer an option.  For that reason, as well as saying thanks to .net, 1 dollar from every print sold is donated to the Mockingbird Foundation.  I also plan to donate some original setlist drawings/paintings for them to auction in the near future.

The entire summer tour (so far) is available for sale via Etsy.  I also have deals for purchasing an entire run (saving you $$$).  Orders ship with handmade stickers, and some random orders might get a Gamehendge or Reba print!  I will be at Merriweather Post Pavilion walking the lots selling setlists, as well as some other art.  Look for the bearded guy (that’ll help)  holding an antelope crossing sign up.  Ask nicely and I’ll give you a sticker!

I finally finished up last nights show setlist.  This one was a bit trickier, since Phish ended up playing a 12 song second set (plus a 2 song encore).  This set (while awesome), threw off my 11×14 grid system that had been working all tour so far.  I sat last night with two options: Try to cram everything on an 11×14 area, which would make the images smaller and obviously crammed together, or expand to 11×17.  I opted for the latter, which makes this print an oddball, unless they keep this trend up.

As with the others, this print is available for sale via etsy.   As I may have mentioned before, set notes are courtesy of Phish.net, who were gracious enough to allow me to use them.  In appreciation, a portion of proceeds from each illustrated setlist benefits the Mockingbird Foundation, a nonprofit founded by Phish fans that support music education for children.

I’ll be getting ready to illustrate the Northerly Island run, although it’ll be tough since I’ll be out of town.  I will try to get at least sketches up via twitter,  with finished prints available early next week. Make sure to follow me on twitter : @joseeen to see my set list sketches, generally after each set!

Each print is available for sale, as well as a discounted set of the run at Randall’s Island.

Apologies for the lack of updates, it’s been a hectic couple days with SPAC run (couch/camptour), The Mann shows (which I attended), then the inevitable wook flu I’ve had the last couple days.  I’ve managed though to finished up the SPAC setlists as well as the first night of Mann (only 2 shows behind!)  These are all available via etsy, as well as discounts for purchasing whole runs of shows

Last night of SPAC was my favorite of couch tour, in this case camp tour.  I thought I’d be missing it since I was doing a family camping weekend. Luckily I was able to get a stream of the show that sounded good, and got to enjoy first set along a lake, and second set in front of a fire. 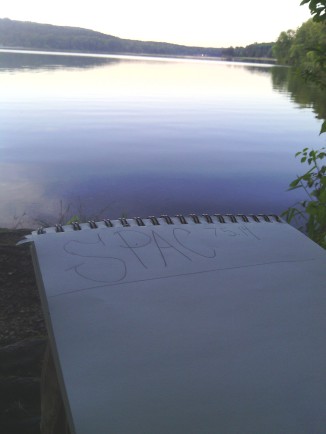 A little light from my nephew

Mann show was quite the experience.  It’s been months since a show, so I was psyched to be able to see them 20 minutes from my house.  I was also excited for the lot scene, which from what I heard opened at 9am.  First thing we noticed when we got there was that there were cops everywhere.  which I didn’t think much of.  I’ve sold my antelope canvases before without a problem, even from the Phish copyright police, who ok’ed them at Burgettstown in 2012.  So I walked around, sold a couple, and on my way back saw a cop eyeing them.  He seemed like he dug them, but then hesitantly told me “You can’t sell those here”  He seemed bummed to have to tell me, but then told me “People are getting all their stuff confiscated”, which I wasn’t about to do.  Naturally after this encounter, people kept calling me over to see them, but with the cop starting to walk towards me, I decided to cheese it to my car.  😦

The show itself was something else.  An impending  thunderstorm and announcers telling us to go to our car, we remained stubborn and found shelter under the walkway (Not under a tree, like some people decided to do).  We huddled up, made new friends, and shared a flask until the storm subsided.  The show didn’t start until 9:20 or so, which was weird because first set was in complete darkness.  We expected a long set, but were surprised to find out they were coming back for another set.  Thank jeebus that Mann’s curfew is 12:30!

Today’s the day!  I’m getting geared up for Phish at the Mann Center.  I have some art on me, including some Antelope signs, Illustrated Setlists (July 1st and 3rd), and some Mann posters.  Just look for a guy in a lime green shirts with a trex on it! 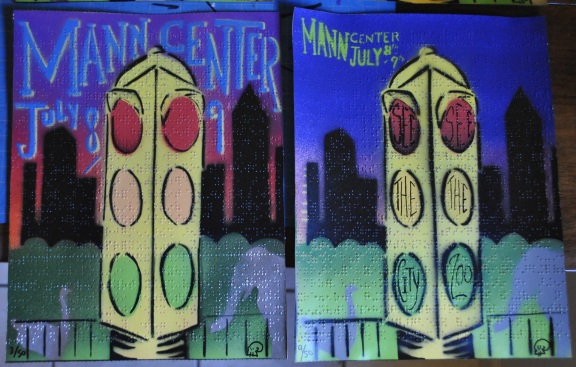 It’s been a crazy couple of days for me.  With 3 nights of SPAC, attempting to draw, post, scan, and edit was quite the challenge.  I managed to find some decent audio streams of the show all the nights, which works fine for me since I’m not really watching the tv most of the shows.  I have been posting the sketches of the setlists on my twitter account, usually right after each set break.  This has resulted in lots of new followers and retweets, which is really cool, and doesn’t happen often.  I probably won’t post too many works in progress here, but the finished pieces.

Here’s the finished version of the First night at SPAC. I decided to switch to color.  The previous setlist seemed a little drab, so I decided to add a bit of color, but not completely.  I’m still getting the hang of coloring digitally, but I’m actually enjoying it this time around.   The hardest thing to get used to is sitting in front of a computer instead of a table with paper and paint.  Depending how this goes, I would like to use more expensive, yet better quality methods to print that would allow me to use watercolors and have the colors accurately reproduced (this has been a problem in the past) .

I have this and several other Phish themed art for sale via my Esty shop, www.etsy.com/shop/Joseeen.  I will also have most of these on me when I go to the Mann and Merriweather shows.  I usually walk the lots selling/holding the antelope sign canvas up.  If there is something I have up here that interests someone,  just keep and eye out for me, I may have it on me at the time.

I will try to get the July 4th show done soon, but with the craziness that will incur with the Mann show down the road from me (20 minute drive!) I’ll either be done with it tomorrow or Thursday.  I’ll have a small sketchbook with me for the Mann shows, so I’ll be sketching the setlist from the show. Make sure to follow me on twitter to see them, I’ll probably be posting after each set!

I finally got my prints made of the set list I drew for Phish’s tour opener.  In spirit of the season (summer tour season!) I’ll be offering these 11.x14 prints for only $10!  I usually price this size for 15 bucks, but for those I might run into on the lots who can’t buy it then, I’d like to offer the same lot price online.  It’ll be an edition of 50, so grab yours now!