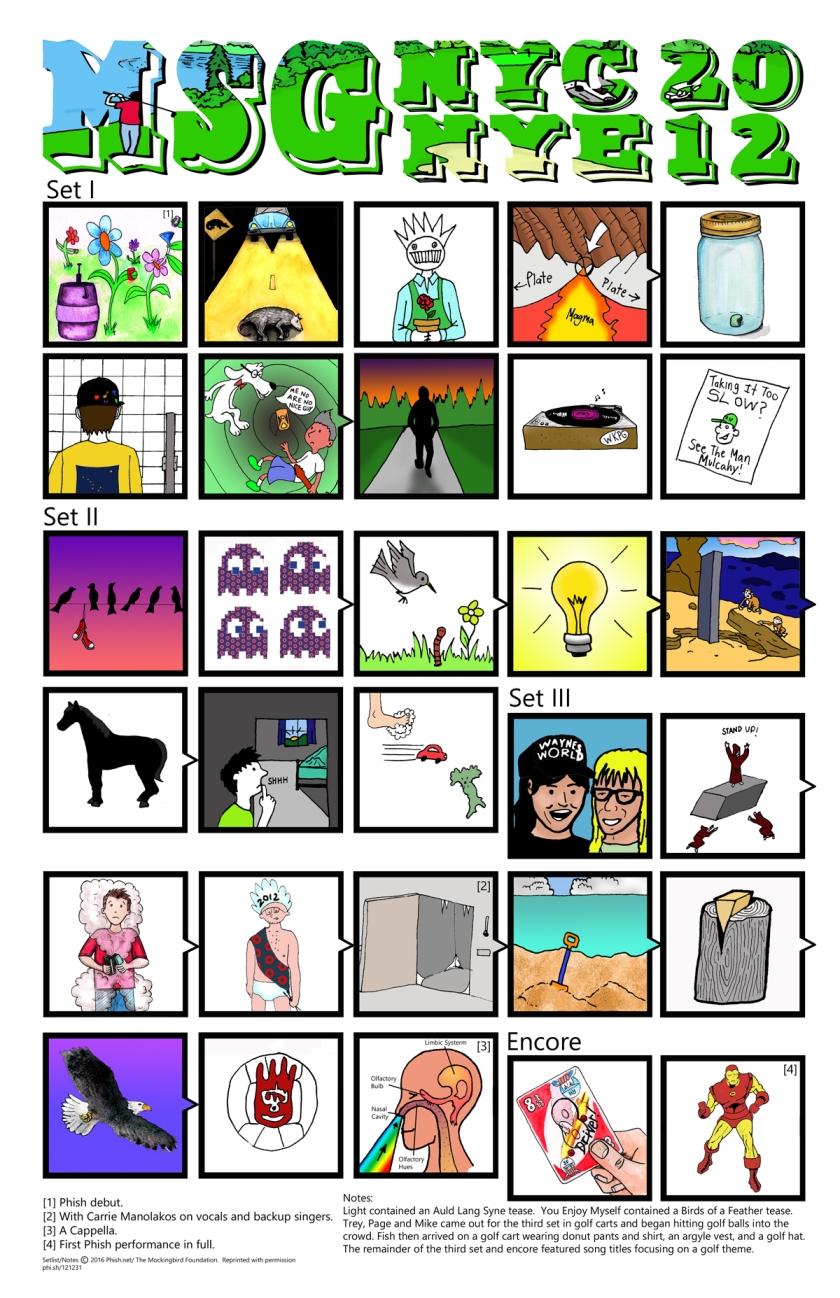 SET 2: Birds of a Feather, Ghost > Piper > Light > Also Sprach Zarathustra > The Horse > Silent in the Morning, You Enjoy Myself

[1] Phish debut.
[2] With Carrie Manolakos on vocals and backup singers.
[3] A Cappella.
[4] First Phish performance in full.
This show was webcast via LivePhish. This show featured the floor and stage covered with artificial turf (numerous plants also dotted the stage). Prior to the show, actors played garden sports including croquet, badminton, and mini-golf, while a few more “sunbathed” on a riser behind the stage. During the first setbreak, golfers came on stage and hit soft golf balls into the crowd.  Light contained an Auld Lang Syne tease.  You Enjoy Myself contained a Birds of a Feather tease.  Trey, Page and Mike came out for the third set in golf carts and began hitting golf balls into the crowd. Fish then arrived on a golf cart wearing donut pants and shirt, an argyle vest, and a golf hat.  Golf carts were brought back on stage during Kung, then began racing past the stage periodically during Chalk Dust. During the Chalk Dust jam, golfers began getting out of the carts, hitting balls into the crowd and dancing on stage.  One of the golfers did the New Year’s countdown from on top of a cart.  Auld Lang Syne was accompanied by balloons dropping from the ceiling and ping pong balls fired from cannons.  Tweezer Reprise featured Carrie Manolakos on vocals and a number of backup singers. The remainder of the third set and encore featured song titles focusing on a golf theme. Wilson was preceded by an animated Wilson golf ball on the venue’s jumbotrons. Iron Man was preceded by Page coming to the front of the stage to wish the crowd Happy New Year and reference the start of the 30th year of Phish. In an apparent reference to Bob Hope, Page wore a blazer, USS Nimitz ball cap and carried a golf club. Driver was stopped and restarted.This show featured the Phish debuts of Garden Party and Fly Like an Eagle, the first full Phish performance of Iron Man (which was last played December 31, 2003, or 192 shows), and the first ever a cappella Lawn Boy.
Setlist/Notes © 1990-2017  The Mockingbird Foundation, Inc