Set 1: Martian Monster, Down with Disease, Waiting All Night, Heavy Things, Axilla, 555, Limb By Limb, Ya Mar, Fuego > Walls of the Cave

Set 2: No Men In No Man’s Land > Carini -> Tweezer > My Friend, My Friend[1] > Roggae, Backwards Down the Number Line > Slave to the Traffic Light

Notes: Trey teased We’re Off to See the Wizard during Limb By Limb. Page teased the Theme from I Dream of Jeannie during Ya Mar. My Friend did not contain the “Myfe” ending. During YEM, Trey held his guitar in front of Mike and played it around Mike’s back. 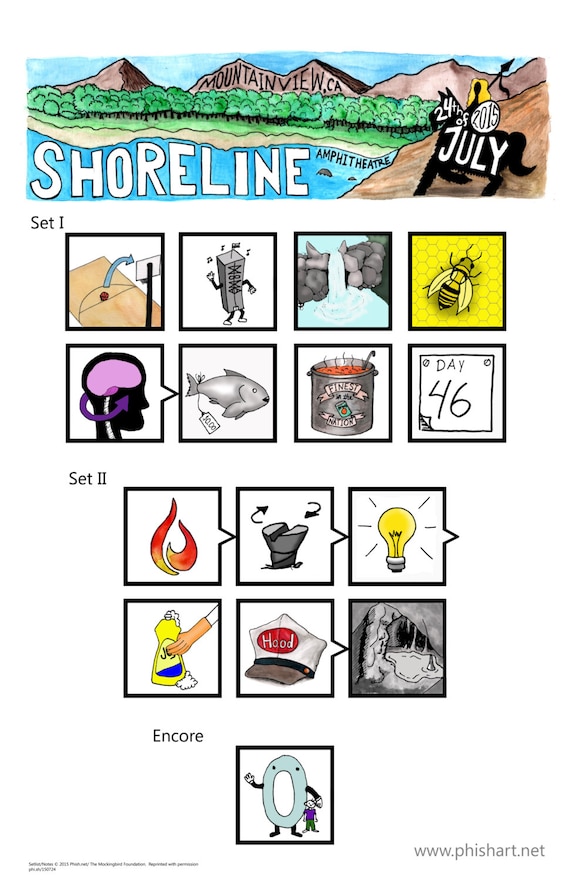 Soundcheck: The Line, Waiting All Night

The past shows have really put me to work.  Four new songs last night, and three on 7/21!

Notes:  This show saw the debut of Mercury, and the Phish debuts of How Many People Are You? (Gordon/Murawski), Heavy Rotation (McConnell), and Scabbard (Anastasio). Do You Feel Like We Do was teased after Maze.  Trey teased Little Drummer Boy at the end of Gin.

I recently finished up my illustrations of the Gamehendge series.  I initially started this project in June of 2013, but after doing 4 illustrations, I put the idea aside as I worked on other things.  I finally got to finish this series when I was recently commissioned to illustrate all the songs for a book they wanted to make for their niece.  In the end I ended up drawing all the other songs that take place pre/post TMWSIY, or pertain to Gamehendge in one way or another (some can be debatable).  I did about 20 6×8 ink and watercolor illustrations total.

The Man Who Stepped Into Yesterday

“..he knew it had always been there, and felt foolish for overlooking the door for so long.” -TMWSIY

“He said that we could swim it if we tried”

“Can you still have fun?”

“Brain dead and made of money”

“And he climbed so slowly”

“The road was his end”

I will be releasing prints soon, and maybe a poster.  The images will also be used in this tour’s illustrated setlists.  I’m working transitioning to all ink and watercolor (Ive got about 40 songs already illustrated).  I’ll also have work at the PhanArt Show during the Mann run (August 12) at the World Live Cafe, so come by and check it out before the show

I recently made this setlist as a commissioned piece of the 6/11/11.  It was made as a wedding present for a couple that had met at this show.  I added some things into the header, including their initials and their likeness in the crowd.  I can do any Phish show setlist, the first one you went to, the best one you went to, or in this case, the one where you met that special someone!  Contact me via etsy, twitter, instagram, or facebook if there’s an illustrated setlist you’d like to own.  And yes, I have done the Big Cypress setlist, it’s a bit ridiculous.

Set 1: Daniel Saw the Stone, AC/DC Bag > Ocelot, Access Me, Vultures, Wilson > Sand,Roses Are Free > Reba[1], On Your Way Down > Run Like an Antelope

Teases:
· On Your Way Down tease in Run Like an Antelope
· Birds of a Feather tease in Chalk Dust Torture

Notes: Daniel Saw The Stone was played for the first time since August 3, 2003 (137 shows). Reba did not contain the whistling ending. Antelope included an On Your Way Down tease from Trey. Chalk Dust included a BOAF tease.