Notes: This show was webcast via Live Phish. Following the debut of Miss You, Trey noted that the song would be on their new album and thanked the crowd for letting them try new material. Disease was unfinished. Fish teased Weekapaug in Twist. Space Oddity was a Phish debut and was performed a capella.

Notes: This show was webcast via Live Phish. Happy Birthday was played for Phish tour manager Richard Glasgow. I Am the Walrus was played for the first time since June 29, 2010 (229 shows).

Phish started up their summer tour last night at the Xcel Energy Center in St Paul, MN.  If last night’s show was any indication, we can expect a lot of bustouts this tour (which means I get to draw a lot of new songs!)

Set 2: Mike’s Song > I Am Hydrogen > Weekapaug Groove, Bouncing Around the Room, Ghost > The Line, Simple -> I Found a Reason, No Men In No Man’s Land,Billy Breathes, Bathtub Gin

Setlist posters are available for sale in my shop, joseeen.etsy.com, and I’m now offering show posters as well!  For this tour, you can get one for $10 ($5 off!) when purchasing a setlist. 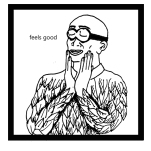 Tour is back!  My favorite time of year, because I have lots of free time to draw all day (benefits of being a teacher!)  I now enter my 3rd year doing my setlist illustrations (74+ setlists, 374+ song illustrations), and I’m ready to make some more!  At this point the process is more like a puzzle, since I’ve draw so many songs, although there will be new variations of songs I’ve drawn before (the ones they play regularly).  The headers will include all new drawings, as well as variations of my show posters I did for the shows as well.

2015 was a great year for me artwise! My setlist art helped me get a few jobs designing some show posters ( Without A Net, Jazz is Phish, and Tom Hamilton’s American Babies), and Poster sales helped raise over $200 dollars for Mockingbird Foundation ($1 from each setlist poster is donated as way of saying thanks for letting me use their setlist notes).  I’m excited to see what 2016 brings.

This year brings a new series of posters for Phish summer tour.  I knew I wanted to still create the illustrated setlists, but I also wanted to do something completely new.  Having made a couple gig posters I learned a lot quick (using photoshop/dealing with short deadlines), and I viewed this series as a way to explore using digital and traditional media, and just figure new things out.   It was an ambitious project, 15 posters in all.  They are a combination of digital and ink and watercolor.  Originally it was just going to be the state fish, but searching yielded many entertaining images of fishermen with their catch, which I found even more entertaining when you omit their faces! I’ve done 10 so far before tour started, and will create the rest inbetween doing the setlist art and attending shows (Mann and SPAC!)

I’m selling my prints in a few locations; My etsy shop along with setlists and song

illustrations, A new streamlined shop (www.phishart.com) that’ll offer the show posters only, as well as on lot at SPAC, and possibly Mann (technically no vending is allowed).

As mentioned earlier, I will continue to post the setlist illustrations shortly after each show, as well as an option to purchase.  For this tour I’m also offering the show poster for a discounted price when you purchase the setlist via my etsy shop!  I also post the work in progress setlist via twitter, and they usually end up in .net discussion threads, as well as r/phish.Follow me on twitter and check them out shortly after each set!

I’m excited to see what this tour brings us.  Hope to see you guys on lot and the shows!

I was recently commissioned to create the setlist for the shows at the Spectrum in Philly back in 1999.  Working with some suggestions from the person requesting the shows, I included some Philly sports icons, Julius Erving and Ron Hextall.  This was a fun project, and it allowed me to draw up some new songs.  I’m always open to do commissioned setlists, although with summer tour approaching it could take a bit.  Feel free to contact me via twitter, facebook, or instagram.

I made a very small edition of these (only 5), and have 4 of each available for sale via my shop.

Set 1: Tweezer > Bouncing Around the Room, Horn, Heavy Things, Dogs Stole Things,My Mind’s Got a Mind of its Own, Roggae, Birds of a Feather, Guyute, Loving Cup

Teases:
· Have Mercy tease in Hold Your Head Up

Notes: Bowie was unfinished. The jam out of Have Mercy included a snippet of Bowie before returning to Have Mercy. The subsequent reggae-style HYHU contained a Have Mercy melody before leading to a vacuum solo. 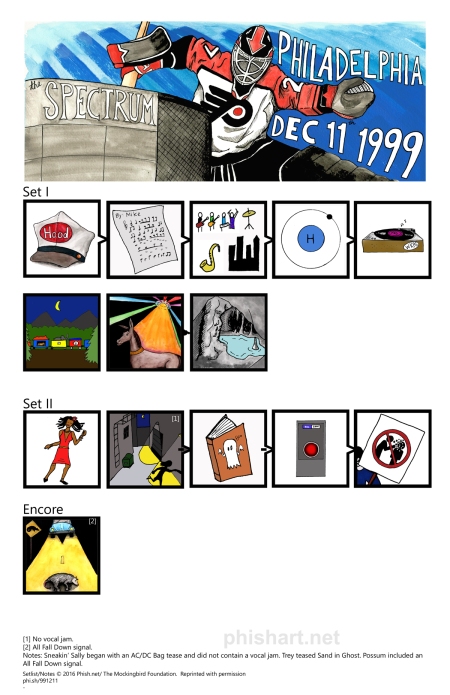 Notes: Sneakin’ Sally began with an AC/DC Bag tease and did not contain a vocal jam. Trey teased Sand in Ghost. Possum included an All Fall Down signal.

Here’s the next installment of my Phish summer tour posters for 2016.  I’m more than half way to my goal of illustrating all 15 venues they’ll be playing at (including Lockn’).  The fishing theme continues with each venue’s state fish. I’ve enjoyed getting back to working with micron pens, as well as working digitally (and learning new things along the way) to create these posters.  I’ve taken people’s thoughts and opinions into consideration for these last couple, as well as some edits to the previous ones (“I still call it Deer Creek”) .  I’m looking forward to drawing some west coast fish, and will be posting them soon.

In the meantime I’ve just opened up my new shop, www.phishart.com, where all the posters from this series will be available, although I will continue to have my setlist posters available in my etsy shop.