Tour is back!  My favorite time of year, because I have lots of free time to draw all day (benefits of being a teacher!)  I now enter my 3rd year doing my setlist illustrations (74+ setlists, 374+ song illustrations), and I’m ready to make some more!  At this point the process is more like a puzzle, since I’ve draw so many songs, although there will be new variations of songs I’ve drawn before (the ones they play regularly).  The headers will include all new drawings, as well as variations of my show posters I did for the shows as well.

2015 was a great year for me artwise! My setlist art helped me get a few jobs designing some show posters ( Without A Net, Jazz is Phish, and Tom Hamilton’s American Babies), and Poster sales helped raise over $200 dollars for Mockingbird Foundation ($1 from each setlist poster is donated as way of saying thanks for letting me use their setlist notes).  I’m excited to see what 2016 brings. 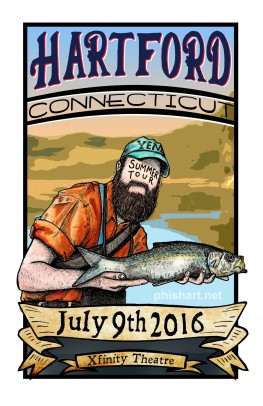 This year brings a new series of posters for Phish summer tour.  I knew I wanted to still create the illustrated setlists, but I also wanted to do something completely new.  Having made a couple gig posters I learned a lot quick (using photoshop/dealing with short deadlines), and I viewed this series as a way to explore using digital and traditional media, and just figure new things out.   It was an ambitious project, 15 posters in all.  They are a combination of digital and ink and watercolor.  Originally it was just going to be the state fish, but searching yielded many entertaining images of fishermen with their catch, which I found even more entertaining when you omit their faces! I’ve done 10 so far before tour started, and will create the rest inbetween doing the setlist art and attending shows (Mann and SPAC!)

I’m selling my prints in a few locations; My etsy shop along with setlists and song

illustrations, A new streamlined shop (www.phishart.com) that’ll offer the show posters only, as well as on lot at SPAC, and possibly Mann (technically no vending is allowed).

As mentioned earlier, I will continue to post the setlist illustrations shortly after each show, as well as an option to purchase.  For this tour I’m also offering the show poster for a discounted price when you purchase the setlist via my etsy shop!  I also post the work in progress setlist via twitter, and they usually end up in .net discussion threads, as well as r/phish.Follow me on twitter and check them out shortly after each set!

I’m excited to see what this tour brings us.  Hope to see you guys on lot and the shows!