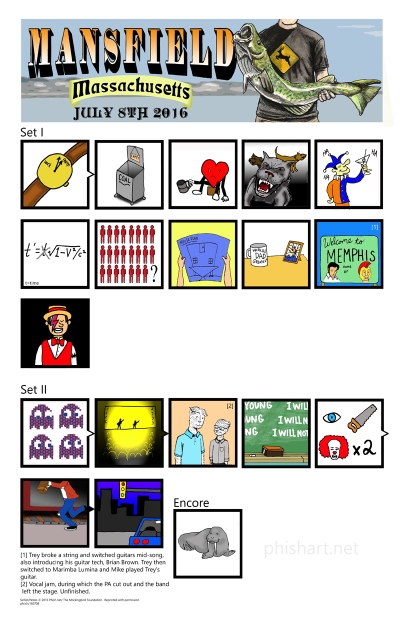 Set 2: Ghost > Light > Wolfman’s Brother[2], Chalk Dust Torture, Saw It Again > Back on the Train >Slave to the Traffic Light

[1] Trey broke a string and switched guitars mid-song, also introducing his guitar tech, Brian Brown. Trey then switched to Marimba Lumina and Mike played Trey’s guitar.
[2] Vocal jam, during which the PA cut out and the band left the stage. Unfinished.

Notes: Eine kleine Nachtmusik was teased prior to Party Time. During Cities, Trey broke a string, switched guitars, and introduced his guitar tech, Brian Brown; Trey then switched to Marimba Lumina while Mike played Trey’s guitar. Wolfman’s contained a vocal jam, during which the PA cut out and the band left the stage. Wolfman’s was unfinished, and after several minutes the band resumed with CDT.

Show posters available at in my etsy and bigcartel shops.

FINALLY working on my Halloween print! Made a few studies that were very helpful in showing my students what is possible with colored pencils and alcohol markers. Final version will be ink and gouache!
Had to do something with all the broken mannequins in my room
My Tweets