SET 1: We Are Come to Outlive Our Brains, Martian Monster, Axilla > Free, The Wedge, Meat, Ghost > Sparkle, If I Could, Maze, Walls of the Cave

ENCORE: Bouncing Around the Room, Slave to the Traffic Light 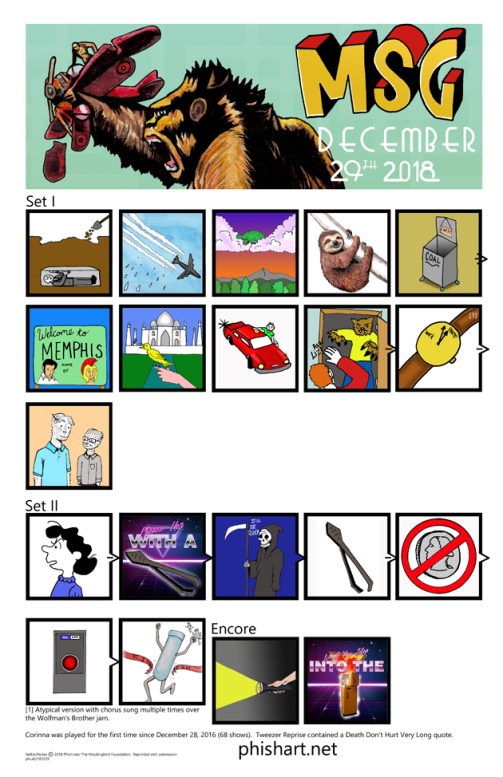 [2] Unfinished.
Alumni Blues had changed lyrics referencing National Bacon Day. Glide II was last played on May 16, 1995 (872 shows). Trey teased Birthday in the first Weekepaug. This show featured the Phish debut of Bliss with Trey on acoustic guitar. Trey teased Crosseyed and Painless in No Men In No Man’s Land. Weekapaug Groove was unfinished. Cool Amber and Mercury and Cavern contained The Final Hurrah quotes.

[1] Unfinished.
Trey teased Auld Lang Syne In Antelope. Trey and Mike came out to start the third set dressed in metallic silver spacesuits. As Mercury progressed, acrobats appeared on stage in front of the band and were lifted up and down, each in their own (unbreakable) net. The midnight balloon drop consisted predominantly of silver balloons and streamers hung from the roof. During Say It To Me S.A.N.T.O.S., Trey and Mike were lifted up in the air (similar to the acrobats) while they performed the song and dancers appeared on stage with giant inflatable objects. DWD and Mercury were unfinished.